In June of 2008, she was purchased by Lauren Cook and under the direction of Triumph Stables this new pairing enjoyed a grand season of championships at the MJMHA Showtime, the Jubilee Regional, the Gold Cup Regional and finished their year as the 2008 Four Year Old Hunter Pleasure World Champions.

Her delicious curves and striking wild bay coloring caught the eye of Pat West and William Shean of Stony Point Farm in Ocala, Florida, who purchased Melania at the Grand National and took her home to the talented hands of Allyson Hughes, who redirected her to the western pleasure division. A very smart move, Allyson and Melania spent 2009 getting to know their new division, then enjoyed making Western Pleasure Championship victory passes at the 2010 Bluegrass Morgan Classic and the Southern States Regional before heading to Oklahoma where they were Top Five in World Champion Ladies Western Pleasure and Grand National Western Pleasure Mare, as well as Western Pleasure Ladies Mare Reserve Grand National Champions.

In 2011, Allyson and Melania won open and ladies western pleasure championships at Citrus Cup Regional, Southern States Regional and the Bluegrass Morgan Classic before jogging into Oklahoma to collect their Ladies Western Pleasure World Champion roses with a unanimous decision out of a tough field of 18 horses. It was here that Catherine Sconzo-Blackburn of Glitter Farms in Oklahoma City decided Melania was just the right the mount for her very talented daughter, Lauren Osborne, who has enjoyed many tricolor victory passes with this very elegant mare. Her many accomplishments with Lauren are too numerous to list here, but include multiple World Champion titles in Western Pleasure Junior Exhibitor 14-17 and Youth, as well as multiple Grand National titles in the same divisions. And now, this wonderful mare can boast being the dam of a Morgan Weanling Gala Grand Champion! 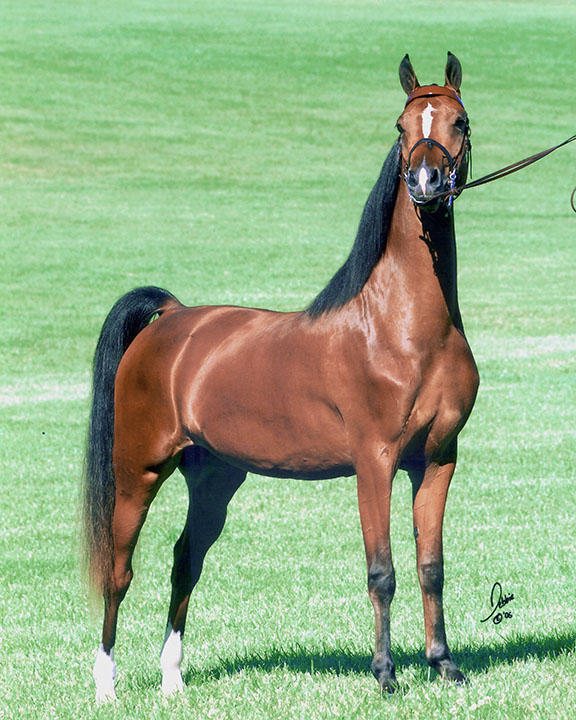